1How does the service Notification Dangerous Goods work?

How does the service Notification Dangerous Goods work?

In the upper part, you specify any hazardous and/or noxious cargo aboard the ship upon its arrival in the port. For bulk ships, you need to specify this for each tank or hold.

Handling per berth
The screen automatically shows all the berths that are visited during the ship call as specified in the “Visit” screen. For each berth that is called at, you indicate the various cargo handlings that are performed there. In any case, this must include the unloading and loading activities; for liquid bulk, you also need to specify the cleaning activities (washing, ventilating) and inerting activities here.

Full reporting and submitting
Once you have finished registering the hazardous substances, click on ‘Complete’. You will proceed to the screen below where you can submit the completed notification.

Upload stowage form
It is possible to download a blank Excel form and have the captain or their crew fill in the hazardous and/or noxious cargo upon arrival. Next, you can upload the completed form in the screen and use this in your notification to the harbour master.

Download stowage upon departure
The hazardous and/or noxious cargo that is on board upon departure (automatically calculated by the PCS; see General setup) can also be downloaded as an Excel form. If desired, this can be uploaded for a subsequent visit. 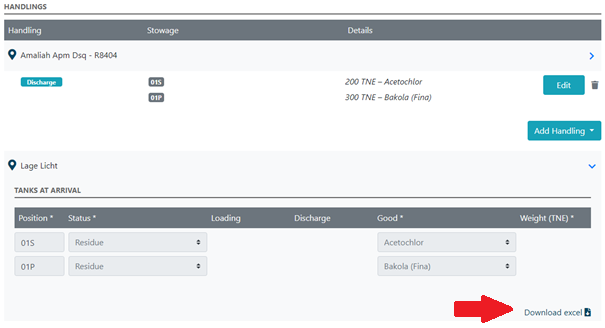 Partial unloading of bulk cargo
When specifying an unloading activity, you can indicate that a tank or hold will be partially unloaded; in this case, you specify the quantity that will be unloaded at the berth. Based on the quantity on arrival and the quantity that is unloaded, the PCS will automatically calculate the quantity of cargo that is still on board upon departure. This means you only need to enter the specific data for this substance once (for the cargo upon arrival). 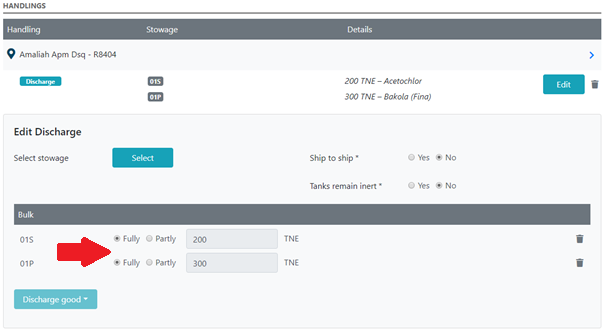 Transit
If transit cargo is involved, you enter this at “cargo on arrival”. You do not need to indicate any further handling for this cargo (after all, transit actually denotes the absence of handling). The PCS will automatically include this cargo again in the cargo upon departure. 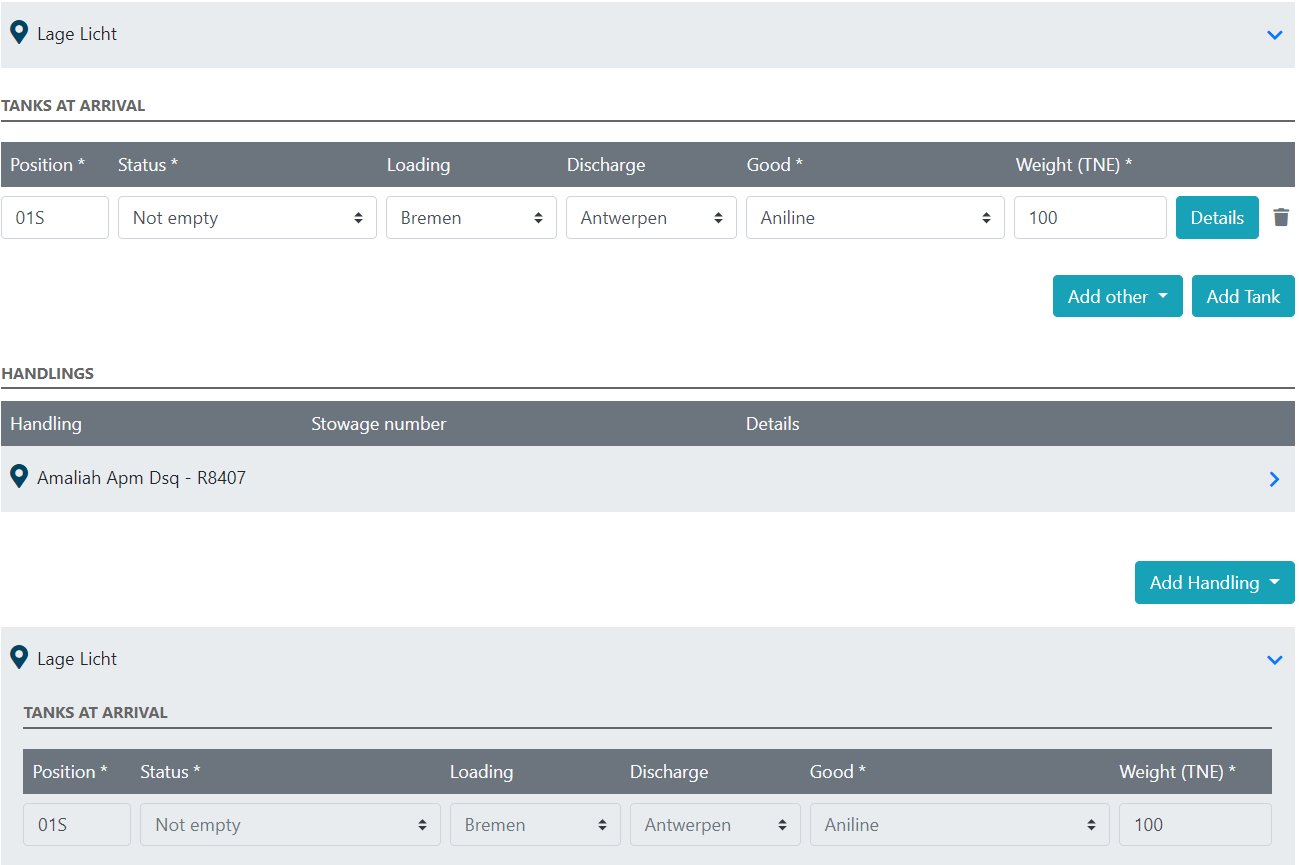 Liquid bulk: Cargo on arrival (‘Tanks on Arrival’)
It is mandatory to report empty cargo tanks that have not been cleaned to the harbour master. To provide a better overview and to prevent you from forgetting one or more of these tanks, please include the complete tank configuration of the ship in ‘Tanks On Arrival’. After that, you indicate the status of each tank. For tanks with cargo, this is ‘not empty’. For empty tanks, you need to make a distinction between ‘residue’ (residue left after unloading), ‘not gas free’ (cleaned but not ventilated) and ’empty’ (clean and ventilated). For each of these statuses, include ‘inert’ if applicable. 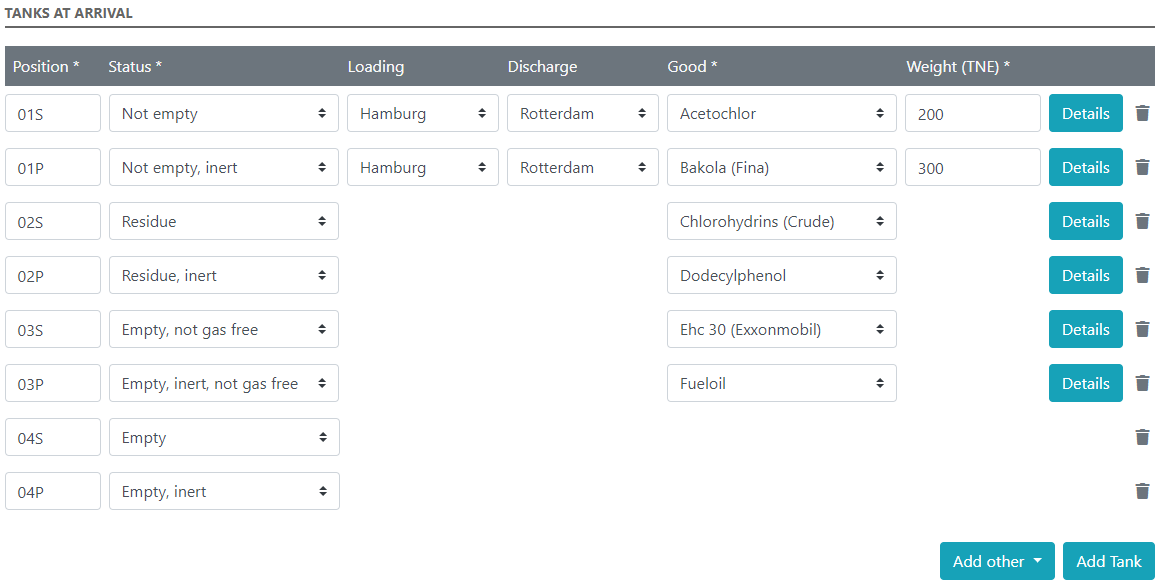 Cargo handlings
For each berth, you specify which handlings are performed and for which tank(s). The different types of handlings are ‘Discharge’, ‘Washing’, ‘Ventilation’, ‘Loading’, ‘Blending’ and ‘Inerting’. Only tanks that have been included in ‘Tanks on Arrival’ can be selected in terms of handlings at a berth. Furthermore, the PCS (based on the tank status) automatically determines which types of handlings apply to which tanks. For example, it is not possible to apply ‘Washing’ to non-empty tanks. This reduces the chance of errors upon import.

Washing / Ventilation
When cleaning operations are performed at a berth, you add a ‘Washing’ type handling to that berth. You can indicate whether this involves a pre-wash or a medium/commercial wash. In the latter case, you also indicate the destination of the washing water (on board in the same tank or in one of the other tanks, ship-to-ship or on shore). In the case of a commercial wash, you can also state whether ventilation will take place immediately after the wash.

For tanks that were already washed earlier and are only ventilated, you can use a handling of the ‘Ventilation’ type.

Inerting
To ensure that the PCS can properly ascertain the status of the tanks upon departure, it is important to also specify any inerting of tanks. 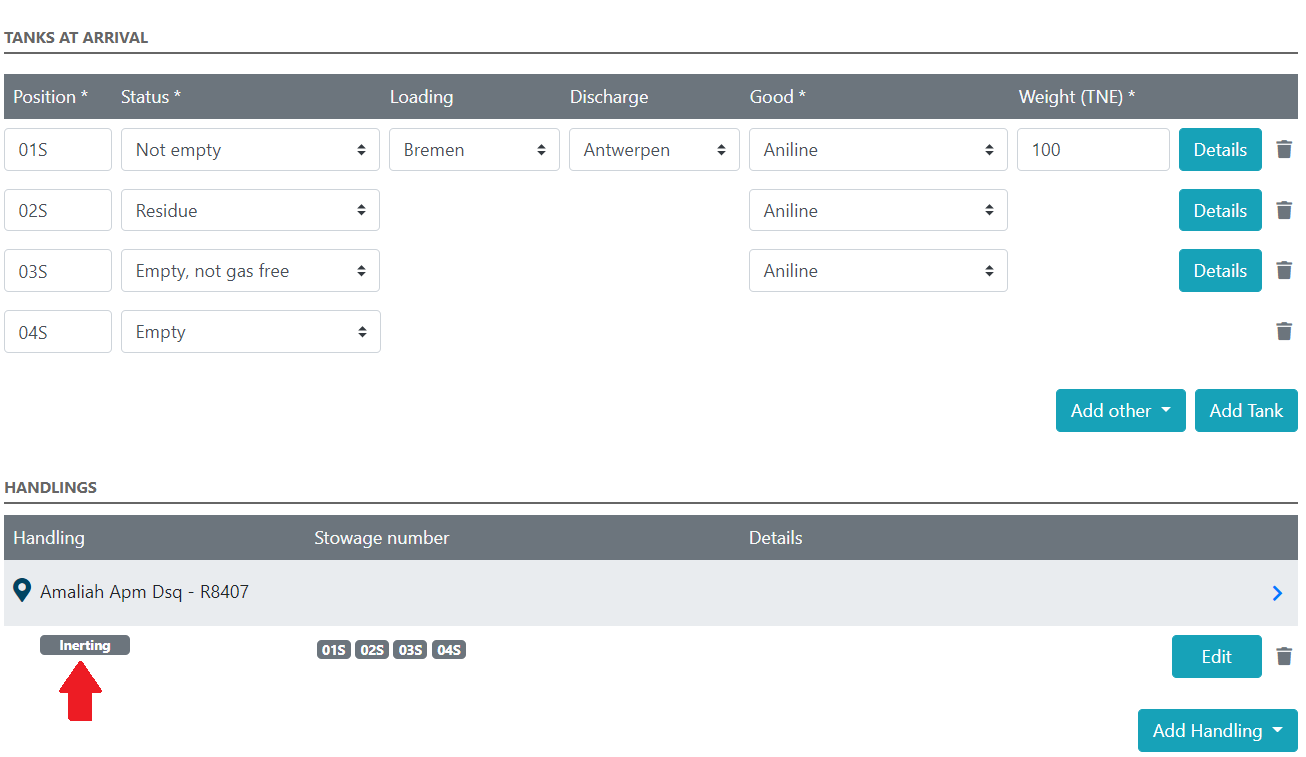 Cargo on arrival (‘Holds at Arrival’)
In this section, you list the holds that contain hazardous and/or noxious cargo upon arrival in the port. You are not required to report holds with bulk cargo for which the substance in question has not been classified as hazardous or noxious unless the holds in question have been decontaminated (see below). You also do not need to report empty holds..

Different substances in 1 hold
The reporting application assumes a maximum of 1 substance per hold. If a hold is divided by means of partitions and different substances are present in the hold as a result, you must include these as separate ‘Positions’ (for example by adding a letter after the hold identification).

Decontaminated bulk
For bulk cargo that has been decontaminated abroad, you can indicate that the hold in question was fumigated in the details. Next, you must specify the necessary information here. In addition to the notification, you must submit an additional statement for decontaminated cargo (regarding the hiring of a fumigation expert, operations in accordance with action plan and consent of the berth owner). This has not changed from the current situation.

Decontaminated bulk cargo other than hazardous and/or noxious cargo can only be reported as Breakbulk for the time being. For cargo, you specify “Fumigated Cargo transport unit UN 3359 Class 9”. For “position” enter the cargo hold number and for “Gross Weight” the quantity of cargo. For “Remarks”, state the name of the fumigant used, the date of treatment with the disinfectant and which fumigation expert (Company name) will lead the operation. The value for outer package is 1 and NE – Unpacked can be specified for type of outer package.

Cargo on arrival (‘Containers at Arrival’)
In this section, you list the containers that hold hazardous and/or noxious cargo upon arrival in the port. You do not need to report containers that do not contain hazardous and/or noxious substances. Empty tank containers in which cargo residues (including vapours) may still be present are an exception in this respect. You specify the relevant substance and indicate that they are ‘unclean’. The PCS will next automatically set the quantity data to zero.

In accordance with ISO standard 9711-1, stowage aboard container ships must be reported in the Bay/Row/Tier format: BBBRRTT. If the bay number consists of fewer than 3 digits, it needs to be preceded by a zero (0). The PCS supports this by automatically completing to 7 positions. 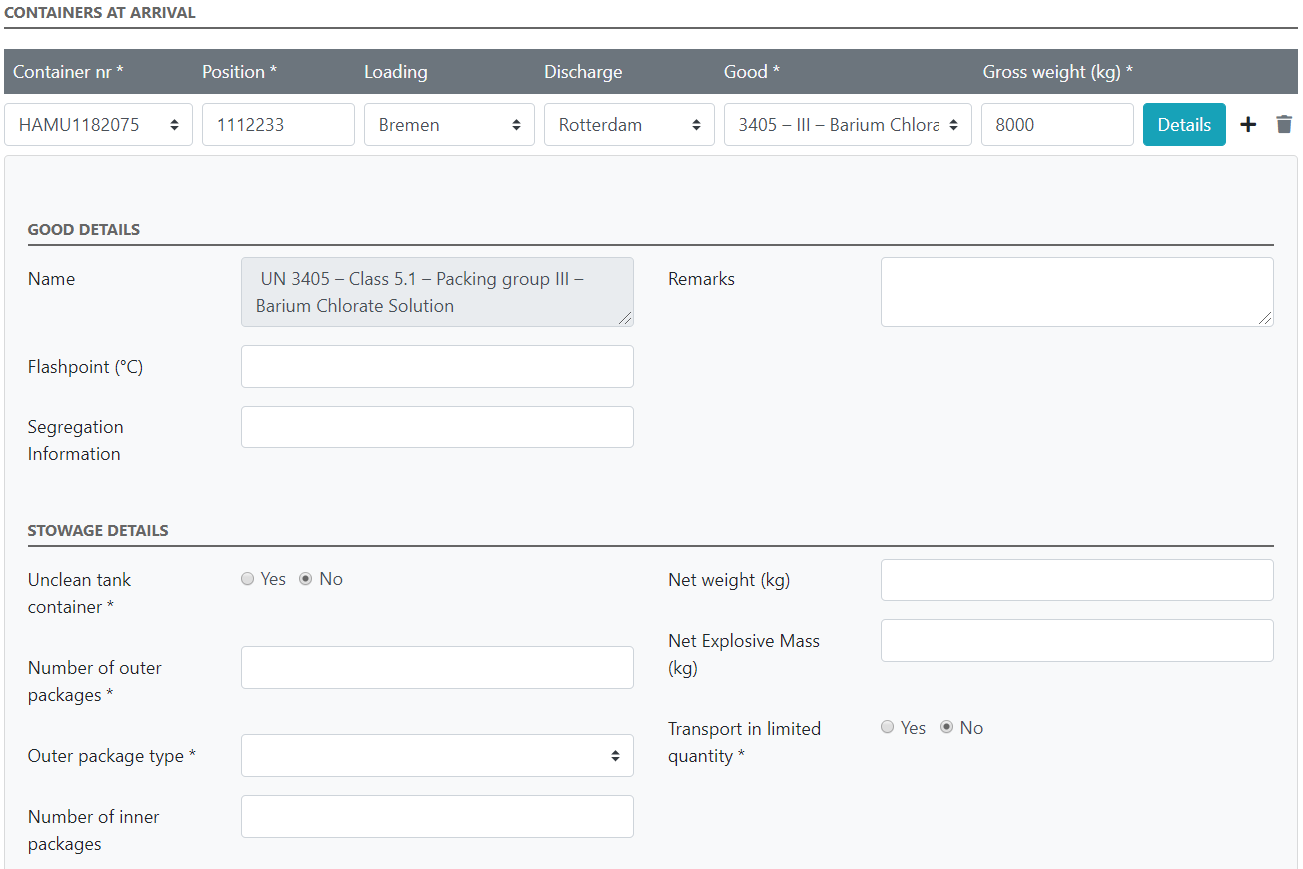 Restowage
When transit containers are positioned in a different position on board during loading and unloading at a berth, you can easily indicate this in the screen by using the “Restow” handling. You specify the new stowage position for each container here. 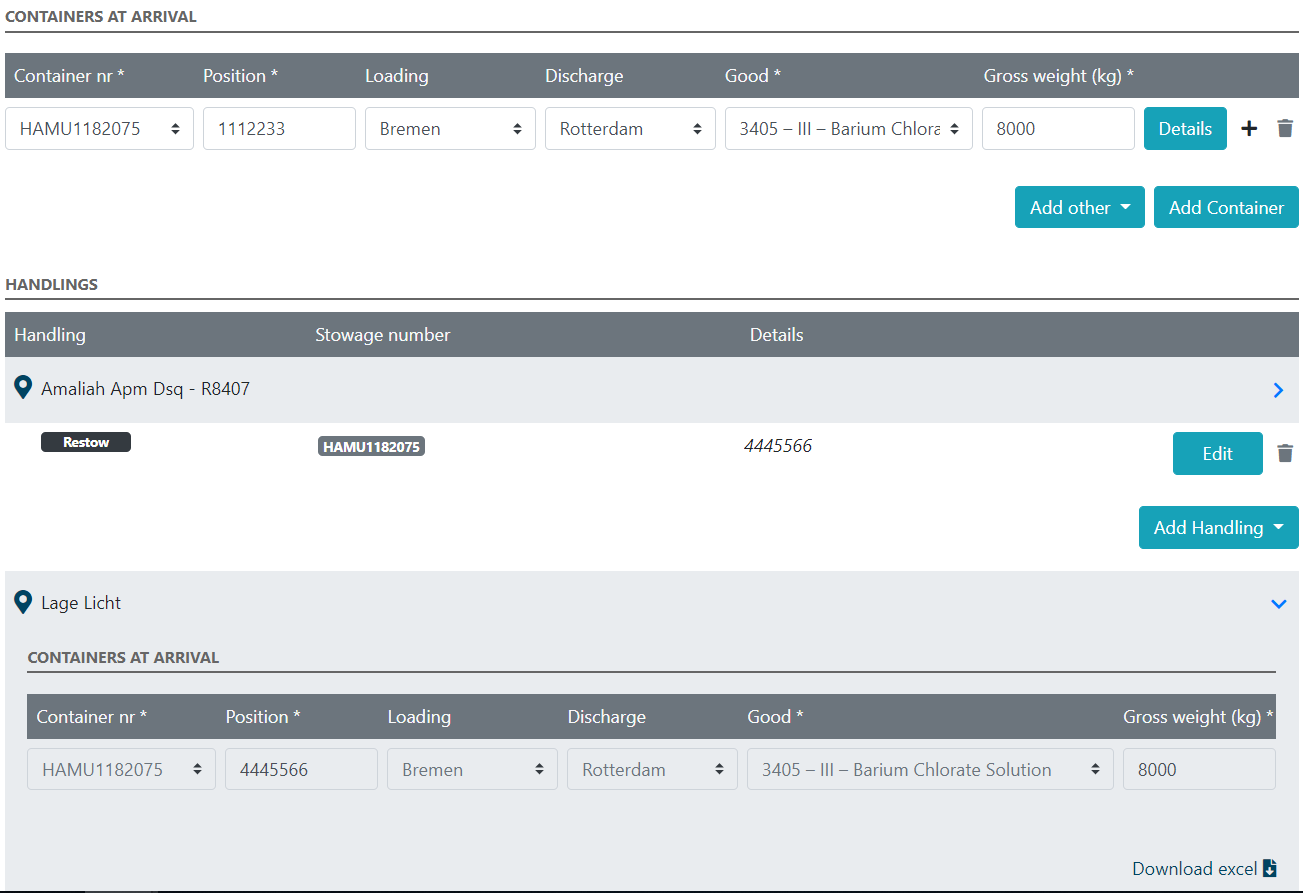 Cargo on arrival (‘Trailers at Arrival’)
In this section, you specify the trailers that contain hazardous and/or noxious cargo upon arrival in the port. You do not need to report trailers which do not contain hazardous and/or noxious substances. In addition to trailers, you also specify trucks with a fixed cover in which cargo is present in this way.
For outer packaging, you indicate the layer of outer packaging within the trailer. For inner packaging, you indicate the inner packaging.

This website uses cookies to track and analyse user behaviour, to improve the user experience and to ensure that relevant information and advertisements can be displayed. Click on 'customize preferences' to view and set your permissions for this website.